Despite Covid-19, The Slybrary Staff Is Up To Three April 10, 2020 – Posted in: Center for General Hyperbolics

The Public Slybrary has exciting news by way of a new mascot! We got him about a week before California’s stay at home order, from a mysterious arcade claw machine in 29 Palms. It took $13.50 in quarters. He’s a Chihuahua/Pug, or Chug, which explains all the beer he drinks, and is about 3 years old, which leaves around 21 dog years to account for. Here goes. He was likely born a working class dog to a working class family, which suits us just fine. He quite possibly spent his formative years learning the hardboiled ways of the streets. That kind of life can lead a dog to unexpected places, and in this case he ended up in Milan to try his paw at being a neck model for dog collars. He quickly tired of the fashion world and moved back to the Americas. He tried out for kicker of the Eagles of the Liga de Fútbol Americano Profesional. Unfortunately, not being purebred Chihuahua, coupled with a nagging knee injury, cut short a promising career. The former issue also got him in quite a few scrapes with the locals, which was actually the impetus for his next adventure, that of throwing his hat in the ring of Golden Gloves Boxing. Despite wanting to be a Boxer ever since he was a pup, this phase didn’t last long; turns out he’s a lover, not a fighter. And that’s where we came in.

And after that lengthy introduction, it’s probably time to introduce him. He has many names, for various reasons, but luckily they’re all Rocky. I’ll explain. First, Mrs. Pomegranate’s family has a tradition naming pets via Beatles’ songs, in this case of course, Rocky Racoon. He also happens to exhibit racoon-like behavior at times. Second, Mr. Pomegranate grew up an hour or so from Philly, so that gives us a Rocky Balboa tie-in. Third, he has a trick knee (the aforementioned football injury), plus he’s often carried much like a football. The combination hearkens back to Rocky Bleier, the former Pittsburgh Steelers halfback. Fourth, we have Rocket “Rocky” J. Squirrel from the Rocky and Bullwinkle Show. Not only is this dog fast as hell, he thinks he can fly. Oh, and he’s about the size of a squirrel, but don’t tell him that. Fifth and finally, he sleeps like a rock. Every morning seems to be a rebirth of sorts.

Since coming on full-time at the Slybrary, Rocky has fit right in, to the point that our pooka, Bunky, has taken him under his wing as a pooka-in-training. It’s going to take some time, but he’s taking to his studies admirably. As far as shapeshifting goes, those of a flying squirrel and racoon of course came naturally. He’s also occasionally appeared as a fox, bat, and, not surprisingly, a Pteropus, or megabat (aka flying fox). We’ll try to keep you updated on his progress, and hopefully send out graduation notices to all Public Slybrary Patrons upon completion. For now, we leave you with a picture of a very lifelike statue of Rocky, which adorns the entrance of our fine institution*. 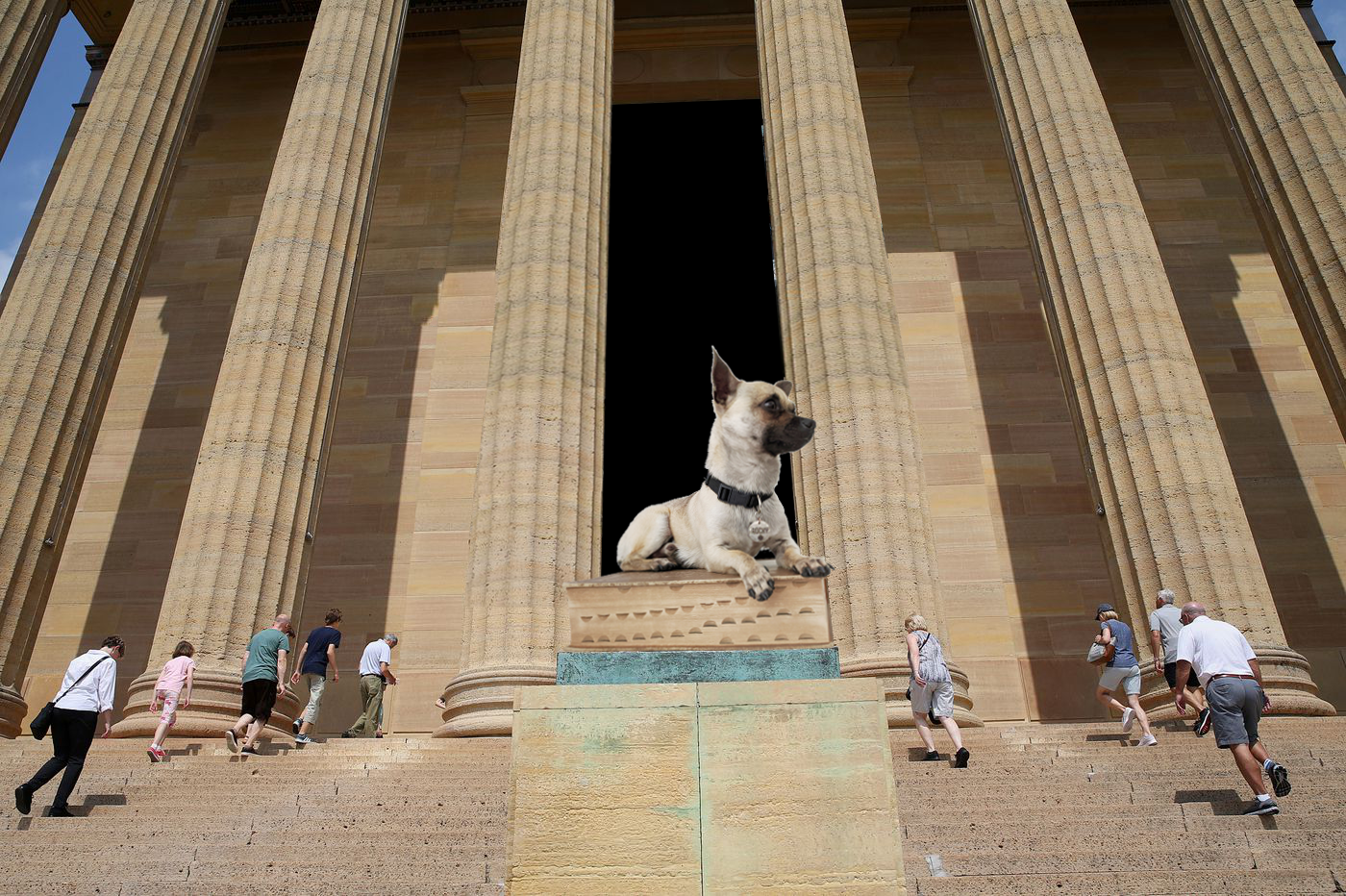 *Some of you may claim that this looks an awful lot like the Philadelphia Museum of Art, where one of Rocky’s namesakes famously ran up the stairs, to which I’d counter that they already have a Rocky statue of their own. Does it look like I have the Photoshop chops to pull something like that off? Don’t answer that, or look too closely. #suspensionofdisbelief