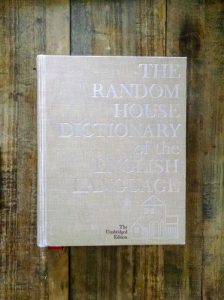 As you should know by now, the Slybrary’s book safes are inspired by the Head Slybrarian‘s namesake great-granduncle, “Jumping” Jehoshaphat Pomegranate, Superintendent of The Holistic College and Health Resort, a ‘utopian sanitarium’. That inspiration is most apparent in this new line of Predictionary™ ouija book safes we present to you today, but more about that later. You probably also know that Jehoshaphat (known as J.J.) began his career at THC&HR as a patient due to his overzealous sister’s intolerance and total lack of imagination concerning a particular pooka named Bunky. What you couldn’t possibly know, and not simply because I just made it…’s discovery, is that once he was committed, Bunky disappeared. It’s ironic that J.J. was committed because he insisted Bunky existed, while once Bunky left, J.J. really seemed to lose his mind. He began raging against the machine, which, under the circumstances, gave the appearance of raving like a lunatic.

After about a day of this erratic behavior, J.J. was awarded his own room, albeit solitarily confined. After a few more days left alone to think about what he’d done, during which he kept doing it, he was offered an opportunity to partake in a progressive new therapy, though not exactly free of charge. Sorry, that was a cheap one. As you can see in the picture below, it was electroshock therapy, which is no joke. J.J. himself wasn’t at all keen on the prospect either, that is until he saw the private nurse he’d be assigned to administer the treatment. She was a ravishing young gypsy girl with copper hair and eyes of green, named Mary Jane (M.J.). That’s not them in the picture, unfortunately. That would’ve been pretty cool. Oh, and full disclosure, J.J. also thought there was an outside chance he’d develop some sort of superhuman power through the shocks. He was an optimist.

Use of electrical apparatus. Bergonic chair for giving general electric treatment for psychological effect, in psycho-neurotic cases. World War 1 era.–Originally posted to Flickr as Reeve041476 from the Otis Historical Archives National Museum of Health and Medicine

As it turns out, J.J. actually kind of enjoyed the procedure, but of course didn’t develop the super powers he anticipated, so after a few sessions he convinced his doctors he was well enough for more standard regiments. As J.J. became more comfortable around M.J., he decided to open up to her about Bunky. To his astonishment, she claimed to not only know of the infamous pooka, but to be in contact with him! Having not communicated with Bunky since his internment, J.J. asked how this could be? At this point M.J. produced a mysterious, ancient-looking book. When opened, it was revealed to be hollowed out and filled with various oddities, including a planchette, which she pulled out and set on the inside cover, having been fashioned into a talking board, or ouija board as it’s commonly known.

Now, it bears mentioning that J.J. grew up during the height of the Spiritualist movement, and was in fact the illegitimate step-grandson of Andrew Jackson Davis, the renowned American Spiritualist, also known as the Poughkeepsie Seer. It’s a crazy, convoluted story, but you can read all about it here. Anyway, being somewhat familiar with talking boards, J.J. immediately attempted to contact his old pal, but to no avail. For reasons never satisfactorily explained, it seemed Bunky would only communicate with M.J. operating the talking board. For many, this would be a source of great suspicion.

It never seemed to be a point of contention between J.J. and M.J., though. They were not only married within the very same year he was committed, but J.J. was also somehow named Superintendent of The Holistic College and Health Resort. And although M.J.’s use of talking boards was exhibit A in the lawsuit that eventually closed THC&HR, they never wavered on their efficacy. After the sanitarium’s closure and even with their subsequent exoneration, public opinion still suggested they relocate. After years of wandering, they settled on the west coast, opening a progressive bookstore in which they also sold replica ouija books like the one M.J. used.

And that finally brings us to the meat of the pudding, or whatever the saying is. And without any further adieu, which I’m assuming is French for nonsense (drumroll, please)… 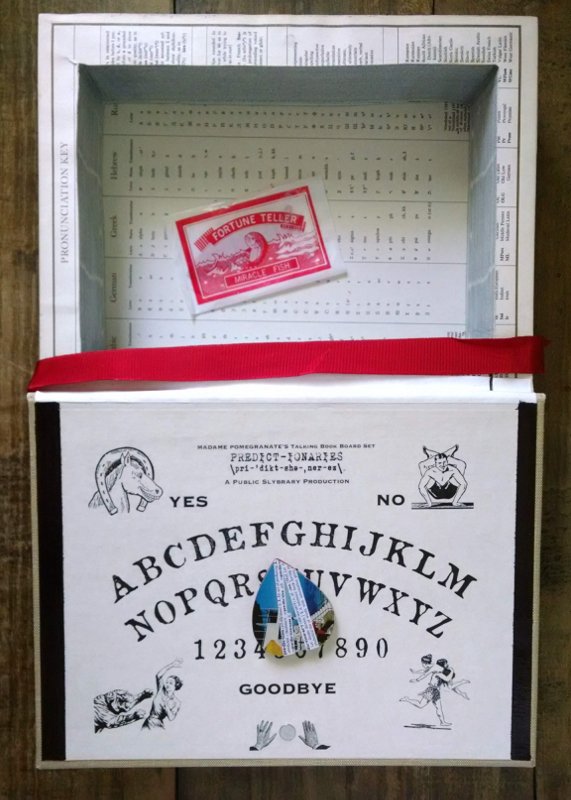 Today, the Public Slybrary is very proud to unveil its very first tribute to Mary Jane “Madame” Pomegranate! Behold, the Predictionary™! Now you can keep AND tell your fortunes in one swell book. Weighing in at…a mere fraction of its original weight, this behemoth features a full 7″ x 10″ x 3″ of storage space, well, actually an empty one, but you know what I mean. I know it’s not ideal, but you could conceivably summon Webster and spell words and get definitions as needed, though I’m pretty sure you won’t.

We have a few more Predictionaries™ in the works, as well as another style we’re calling Fortune Tellers/Keepers™, so Stay Tuned!

To see more info or to purchase this particular Predictionary™, click here.

« Despite Covid-19, The Slybrary Staff Is Up To Three
Former Pooka of the Year Runner-up Making a Comeback! by JJ Pomegranate »