If you’re like me, you’ve witnessed enough head-scratching situations to shake a monk. Having been to more than a few carnivals and even a couple of county fairs, well, I’ve seen things that are hard to reconcile. Rather than turn away from that which causes me to question my very reality, I choose to embrace it. Currently that attitude has me embracing a 6-foot tall, half bunny, half donkey ‘pooka’ named Bunky. 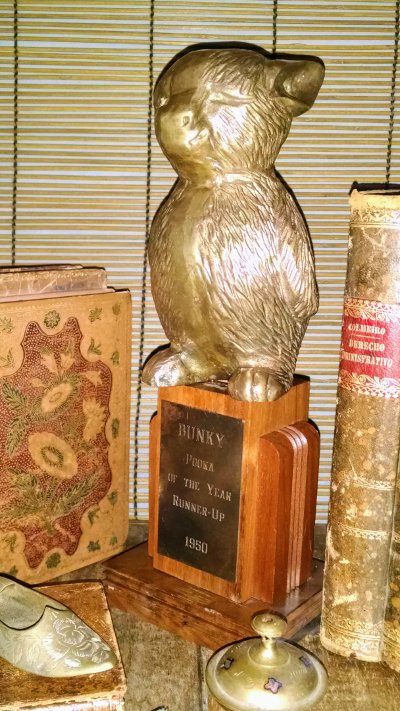 It seems I unwittingly inherited Bunky from my namesake great-granduncle, “Jumping” Jehoshaphat (J.J.) Pomegranate, who was, by all accounts, a daydrinking daydreamer; a generous spirit who perhaps hit the spirits a bit too generously; a good drunk is what I’m trying to say, and prior to his predilection for pickling, he was simply good.

Those who knew him well unanimously claim his time in WWI changed him, though he himself has never spoken of it. Despite these presumptions, he was amicably happy-go-lucky, albeit light on the lucky. He had a je ne sais quoi that could only be attributed to his joie de vivre. He also didn’t speak French. However, he did fight alongside many francophones while serving under Pershing‘s 69th Infantry Regiment during the Somme Defensive of 1918. It’s assumed that a fallen French freedom fighter from the Channel Islands is who bequeathed J.J. what everyone back home (except his sister) came to know and accept as his pooka, the aforementioned Bunky.

According to legend (and Wikipedia), the pooka can assume a variety of forms, either appealing or appalling, bearing good or bad fortune. It can take a human form, but usually retains some sort of animal features, be it ears, tail, or what have you. As animals, the pooka most often appears as a horse, cat, rabbit, raven, fox, wolf, goat, or dog and is usually considered a deft shapeshifter. I say usually because, as I mentioned, Bunky is a distinct departure due to his eternally being stuck as a cross between a bunny and a donkey, thus the nickname that’s stuck since his time at the Academy.

Bunky’s inability to transform notwithstanding, he was an outstanding pooka in all other respects and second fiddle only to the most famous pooka of all time, Harvey. As a testament to that fact, we recently unearthed Bunky’s runner-up trophy from 1950’s Pooka of the Year Awards. As we all know, 1950 was Harvey’s year. We came into the artifact’s possession during an excavation of The Holistic College and Health Resort, the infamous “utopian sanitarium” to which J.J. Pomegranate was committed, by his sister, due to his constant but invisible companion since the war, Bunky.

You might ask, “Why was Bunky considered such a great pooka if he got his human locked away in a loony bin?” To which I’d reply, “that’s true, but it was due to Bunky’s influence that within a year, ol’ J.J. was superintendent of said loony bin, which, by the way, is an archaic and offensive term; you should watch that stuff.” And although THC&HR was eventually shut down under a cloud of controversy**, they nonetheless helped countless people, though mostly counts and countesses.

Let’s suffice it to say that being a pooka is complicated.

**We’re obliged to reiterate and emphasize that the sanitarium was cleared by a federal judge of all cult-like improprieties.

You need to write some serious fiction!

Thanks man! Coming from you, I’ll have to really consider doing so, though I seem to be more inclined to silly fiction.

That’s a great read, man! Although I’ve seen Bunky the pooka first-hand, I never knew there was such an engaging backstory!

Thanks Rob! Bunky’s never been much of a talker, but once he was reunited with his old trophy, the floodgates opened. He has more than a few choice words about Harvey as well; maybe that’ll come out in a future post 😉